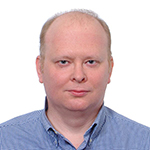 Dmirtry Korobeynikov (AKA Dimitri Korobeinikov) is Assistant Professor at the Department of History, State University of New York (Albany). His research interests include the interaction between Byzantium and her eastern neighbours: the Arabs, the Seljuks, the Mongols, and the Ottomans. Having received a B.A. and a doctoral degree at Moscow State University, he obtained a D. Phil. from the Oxford University, combining a double specialization as a Byzantinist and an Orientalist. While at Oxford (2002-2006) Dr. Korobeynikov studied also Armenian and Syriac. His book Byzantium and the Turks in the Thirteenth Century (Oxford, OUP, 2014) received the prestigious John Nicholas Brown Prize of the Medieval Academy of America in 2018. He is currently working on the collection of Armenian, Syriac and Arabic seals at the Dumbarton Oaks Museum (Washington, DC).