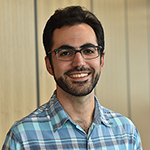 Michael Pifer is lecturer in Armenian language and literature at the University of Michigan. He is a literary scholar of medieval Anatolia and the Caucasus, with a broad interest in the movement of tropes, genres, rhetoric, and styles across linguistic boundaries. His book, Kindred Voices: A Literary History of Medieval Anatolia (Yale University Press, 2021), sheds light on the period from 1250 to 1340 when a convergence of cultures, languages, and religions produced fresh poetic styles and sensibilities that were native to no single people in this region. This is the first book to study the era's major Persian, Armenian, and Turkish poets as part of an interconnected literary landscape. It was supported by a fellowship from the National Endowment for the Humanities in 2016-17.